IDENTIFYING WITH THE BEAST: ANIMALITY, SUBJECTIVITY, AND SOCIETY IN ANGLO-SAXON ENGLAND 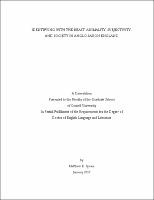 My dissertation reconsiders the formation of subjectivity in Anglo-Saxon England. It argues that the Anglo-Saxons used crossings of the human-animal divide to construct the subject and the performance of a social role. While the Anglo-Saxons defined the “human” as a form of life distinct from and superior to all other earthly creatures, they also considered most humans to be subjects-in-process, flawed, sinful beings in constant need of attention. The most exceptional humans had to be taught to interact with animals in ways that guarded the self and the community against sin, but the most loathsome acted like beasts in ways that endangered society. This blurring of the human-animal divide was therefore taxonomic, a move to naturalize human difference, elevate some members of society while excluding others from the community, and police the unruly and transgressive body. The discourse of species allowed Anglo-Saxon thinkers to depict these moves as inscribed into the workings of the natural world, ordained by the perfect design of God rather than a product of human artifice and thus fallible. “Identifying with the Beast” is informed by posthumanist theories of identity, which reject traditional notions of a unified, autonomous self and instead view subjectivity as fluid and creative, produced in the interaction of humans, animals, objects, and the environment. My dissertation is divided into four chapters, each looking at a figure in Anglo-Saxon society (the teacher, the warrior, the sovereign, and the saint) and its construction through the discourse of species. In my first chapter, I analyze the three poems of the Old English Physiologus, which align the teacher’s ability to influence an audience and create the Christian community with animals’ ability to attract other beings with pleasant sounds and smells. The second chapter examines the roles of animals in Anglo-Saxon heroic poetry. I argue this genre utilizes animality to imagine the capabilities of the extraordinary warrior body but also to depict animals being “outanimaled” and reify human superiority. Chapter Three, through a reading of legal texts and the poem Elene, shows how Anglo-Saxon sovereignty was allied with the hawk and horse. This worked to establish the Anglo-Saxon sovereign as a continuation of Germanic and Roman forms of kingship as well as emphasize the ruler’s ability to project his power over large expanses of space. The final chapter looks at the cult of the dogheaded Saint Christopher, seeing its popularity in Anglo-Saxon England as the product of a syncretic belief in the supernatural power of sacrificial, protective canine. Further, it argues the Anglo-Saxons imagined Christopher’s overcoming of animality and emergence as a missionary to parallel their own history as a once-bestial folk brought into Christendom and responsible for using their newfound humanity to evangelize those non-Christians proximate to them. “Identifying with the Beast” thus challenges previous work that maintains the human-animal distinction began to erode in the twelfth century, pointing out instead that this supposed divide has always been permeable.