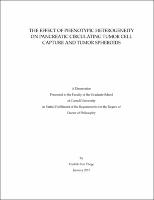 Pancreatic cancer is the third-leading cause of cancer-related death in the US and represents a difficult challenge to modern medicine, with increasing incidence and modest improvements in treatment outcomes. Pancreatic cancer is characterized by aggressive metastatic progression and high rates of resistance to chemotherapy, and there are currently no reliable biomarkers for early detection. In addition, clinicians are faced with difficult decisions regarding the potential benefit of surgical intervention in high-risk individuals, as pancreatic resection often has serious side effects. As such, there is an acute need for the development of improved biomarkers for early detection and to guide treatment. There is also a need for the development of in vitro models to study processes that lead to increased complexity in pancreatic cancer, including processes that lead to increased intra-tumor heterogeneity. The research projects described in this thesis are centered around the question of how phenotypic heterogeneity in pancreatic cancer cells influences the performance of platforms engineered to analyze rare cells in patient blood samples, and the self-assembly of cancer cells into tumor spheroids. These endeavors were spurred on by our early observation that circulating epithelial cells can be isolated from patients with precancerous pancreatic cyst lesions (Chapter 2), and that analysis of these cell populations may serve as a biomarker to stratify patients for surgical intervention. In later studies we have strived to optimize capture of pancreatic circulating tumor cells in a microfluidic immunocapture platform (Chapter 3), and elucidate what effect the epithelial to mesenchymal transition (EMT) and the acquisition of chemoresistance has on its performance (Chapter 4). In parallel, we have developed in vitro models of resistance to gemcitabine chemotherapy to study how the associated phenotypic changes lead to changed cell-sorting behavior in tumor spheroids, and how this influences the response to chemotherapy of the cancer cell population as a whole (Chapter 5). In addition to the scientific contributions described in the thesis chapters, this work has resulted in the development of a range of engineering tools, in vitro models of EMT and microtumor formation, and the establishment of a large panel of chemoresistant pancreatic cancer cell lines, all of which can be used to enable further research into this area.