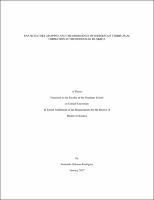 The post-colonial critique of participatory mapping, once held as a tool of empowerment for indigenous peoples seeking property rights to their ancestral territories, has turned attention to the ways in which the law and mapping practices constrain rather than enable the prospects for indigenous autonomy. This critique, however, often fails to consider the effects that these participatory mapping projects have on the capacity of indigenous organizations to mobilize their own unique forms of territoriality. This paper seeks to contribute a different reading of participatory mapping by using theoretical insights from post-representational cartographies to analyze the case of the Miskitu peoples in Honduras. The Miskitu have collaborated in participatory mapping projects since the early 1990s as way of advancing their claims for the legalization of their ancestral territories in the Muskitia region. I engage with post-representational cartographies as a way of understanding maps, not as an ideological representation of space but as expressions of dynamic social practices. I conduct this post-representational analysis by contextualizing the social practices that led to the production of four maps of the Muskitia region and by observing how these maps were later re-inscribed and transformed into specific socio-spatial arrangements. Based on this analysis, I propose the idiom of co-production from science and technology studies as a productive way to engage with the multiplicity and contingency involved in participatory mapping.