Chinese Construction at the New Frontier: Development, Social Change, and the Government of Uyghur Identity in Urban Xinjiang 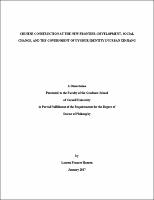 In the twenty first century, Beijing has answered Xinjiang’s so-called ‘ethnic question’ by pairing top-down efforts to Sinicize the region with a concomitant attempt to engender bottom-up buy-in among Uyghurs through a suite of tried-and-true development policies imported from coastal China: rapid urbanization and private-sector economic growth. This dissertation examines the unexceptional practice of Chinese-style urban development in Xinjiang, the exceptional social change it has effected among urban Uyghurs, and the factors that explain how so much difference has emerged despite the state’s insistence on sameness. In the first chapters, I conduct a genealogical history of past and present urban policy in Urumqi in order to assess the changing bureaucratic power relations that inform both the state’s sense of problem and the range of policy solutions applied through planned urban interventions in Urumqi. Then, through ethnographic and spatial analysis of the social changes wrought by these interventions, I propose that the reason development does not generate in Xinjiang the same social outcomes it does in coastal China lies in the nature of the Uyghur middle class it produces and the relationship of this new middle class to the rest of Uyghur society. Uyghur individuals and families face an increasingly stark choice: either turn toward Beijing and align themselves with the institutions of the state in the pursuit of middle-class respectability or turn away from these and, instead, live and work entirely within the Uyghur city – turned Westward, toward Central Asia and the Muslim world. The result of this either/or choice, and the host of decisions it effects on issues of housing, education, presentation of self, and even normative concepts of what it means to be a ‘good’ and ‘modern’ Uyghur, has had a profoundly destabilizing effect on urban Uyghur society. In short, in the absence of high-level changes to the repressive social policies and discriminatory practices encountered by Uyghurs in Xinjiang, Chinese-style development has had the effect not of mitigating inter-ethnic or state-society grievances, but, instead, of layering those grievances atop a rapidly growing sociocultural split amongst Uyghurs themselves.