I MODELLI DI VIRTU: MYTHOLOGICAL HEROES IN THE ART OF FIFTEENTH-CENTURY FLORENCE 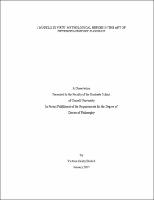 Images of mythological heroes, the half-mortal descendants of pagan deities, abounded in the visual culture of Florence. Whether wrought in stone, depicted on canvas, or articulated in numerous other mediums, depictions of valiant deeds and those who accomplished them were commissioned and collected in growing numbers. While the sixteenth century saw the production of large-scale painted narrative cycles depicting their various exploits as recounted in ancient texts, this interest in the representation of heroes had its iconographic roots in the previous century. My dissertation considers the role of mythological heroes in the visual construction of the heroic ideal in Quattrocento Florence. I argue that changing notions of virtue and a robust culture of exemplarity inherited from ancient and medieval traditions influenced the reception of mythological heroes and account for their reemergence in the visual arts of the city at this time. This type of hero, I maintain, served as a model of civic virtue at a moment when secular ideals began informing public identity. Definitions of the hero changed over time. By examining the reception and resonances of the figures of Aeneas, Hercules, and Orpheus—three mythological heroes who enjoyed significant symbolic ties to the Republic of Florence in the fifteenth century—this study highlights and attempts to rebuild the nexus of literary and visual precedents that together provided the foundation for the mythological hero’s visual prominence in the expansive painted narratives and large sculptures of the next century. These three heroes were selected for closer study in this context in part due to their presence in greater numbers in the visual record than other mythological heroes at the time. In tracing a classical theme from its representational origins in material culture, often located within the domestic or private sphere, to its eventual imbrication within the monumental arts commissioned for public spaces, my research situates mythological heroes and their representation in the Quattrocento within the social fabric of Florence and moves beyond a Medicean-centric context that has frequently framed discussions of classical reception in Florentine culture.