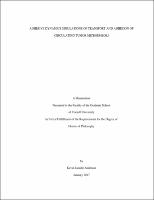 Cancer metastasis is a multistep process through which tumor cells detach from the primary tumor and invade distant tissue sites. Studies have shown that tumor cells can invade as multicellular aggregates or clusters known as circulating tumor microemboli (CTM). CTM are potentially advantageous to individual cells in the survival, proliferation, and establishment of micrometastatic lesions in distant organs, and the presence of CTM in blood is seen as a marker of highly metastatic potential. In this thesis, a novel adaptation of the Multiparticle Adhesive Dynamics (MAD) simulation was developed to analyze the behavior of model CTM interacting with activated endothelium. The model CTM, based on the morphology of Colo205 cell line samples, consisted of doublet, triplet, and 4-mer aggregates in simple geometrical conformations. These aggregates, coated with sialyl Lewisx, were applied to a series of hydrodynamic and adhesive simulations in the presence of an E-selectin-coated plane wall. Simulations consisting of the hydrodynamic component of the MAD simulation analyzed the effects of model aggregate conformation and orientation on adhesive binding potential. Larger CTM conformations with intermediate nonsphericities had the highest adhesion potential. Adhesive interactions were also evaluated, and in vitro rolling assays were used to establish the MAD simulation as a predictor of CTM behavior in shear flow. Model CTM exhibited rolling and transient adhesion interactions under physiological conditions. The distribution of adhesion interactions observed was dependent on the aggregate size. Aggregates consisting of 3 cells exhibited the most stable rolling, and rod-like 4-mer particles were unable to form substantial tethers with the surface. The bond lengths and lifespans were measured, and the distribution of lengths and lifespans correlated with the types of adhesion interactions observed. The results of these simulations established this adaptation of the MAD simulation as a method to evaluate metastatic efficiency.