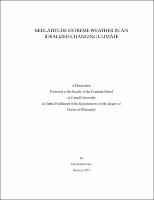 The relationship between the midlatitude eddy-driven jetstream and extreme atmospheric phenomenon, such as blocking anticyclones, atmospheric rivers, droughts, floods, and more, motivate concern from the meteorological and climate community to the general public and policy makers. Poleward or equatorward shifts in the jetstream may persist for a week to nearly a month, emerging as the leading mode of midlatitude dynamics and weather. The persistence that the north-south fluctuations in the jetstream contains is standardly analyzed through principal component analysis, where the leading mode of variability is the shift in jet latitude of the jetstream and is referred to as the annular modes, or zonal index. Comprehensive climate models have been shown to exhibit biases in the time scales associated with the annular modes. This is attributed to biases in climatological jet latitude, with important implications for projections of future climates and midlatitude weather events. Specifically, equatorward biases lead to the modeling of overly persistent jet shifts leading to erroneous projections into future climates. The eddy-mean flow interaction that characterizes the persistent anomalous state of the midlatitude jet depends on processes associated with the lower-tropospheric source of vertically propagating Rossby waves and processes associated with upper-tropospheric wave propagation and breaking. Although these mechanisms will not be explicitly detailed in this thesis, more details on the effect that different physical processes has on the annular mode time scales and eddy-mean flow feedbacks can be found in \cite{Burrows2016}. Instead, the effect of model resolution and truncation will be analyzed in the Geophysical Fluid Dynamic Laboratory's dry, atmospheric model to find consistencies across different grid configurations. A variety of climate change-like thermal forcings are used to generate a range of meridional shifts in the midlatitude eddy-driven jet. These thermal perturbations are used to mimic idealized greenhouse gas warming and El Ni\~no/Southern Oscillation variability, both of which increase the equator-to-pole temperature difference ($\Delta T$), and Arctic amplification (AA) which reduces $\Delta T$. This produces a range of jet latitudes with which to examine annular mode variability. It is shown that along with a decrease in the time scales of jet variability, there is also a reduction in the eddy momentum feedback strength with an increase in jet latitude. These results are in agreement with many other modeling efforts including phase 3 and phase 5 of the Coupled Model Intercomparison Project. Recent proposals linking AA to increases in extreme events have received scrutiny from the scientific community for the lack of dynamical insight. It is believed that the reduction in $\Delta T$ leads to a less meridionally confined, amplified jetstream leading to enhanced advection of heat (cold or warm) and moisture. With an enhanced persistence, these events can lead to extreme weather. To test this hypothesis further $\Delta T$ can be directly increased (polar cooling) or decreased (polar warming) in a highly idealized model to determine the effect on midlatitude dynamics and extreme weather. Two methods will be used to define a blocking anticyclone and to classify isolated extreme weather events. Classically, blocking describes persistent, large amplitude, Rossby wave breaking in the middle to high latitudes leading to midlatitude easterlies and stalled weather systems. It will be shown that by decreasing $\Delta T$, the midlatitude jetstream weakens and shifts equatorward along with eddy fluxes of heat and momentum. Following this, the blocking response shifts equatorward and weakens indicating a reduction in persistent blocking patterns. The climatological finite amplitude wave activity also reduces at all latitudes. These results are corroborated by using a more subjective definition of extreme events and show that the AA hypothesis does not hold true for this idealized model.