Shining light on the Kondo Lattice: An Angle Resolved photoemission study of heavy fermion formation in URu2Si2 and YbAl3 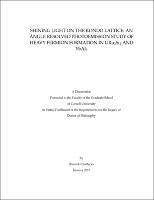 Kondo lattices are a fascinating class of intermetallic compounds that contain certain rare earth elements such as Ce, Yb, U, and Eu, where the interaction between the localized \textit{f} electrons at the rare earth sites and the delocalized conduction sea leads to exciting emergent properties, such as unconventional superconductivity, quantum criticality, valence fluctuation etc. In this thesis, we describe how momentum-resolving capabilities of angle-resolved photoemission spectroscopy (ARPES), performed with high energy resolution at the milli-electron volt scale help disentangle subtle changes in electronic structure in these multi-band systems, thus providing important insights into the microscopic mechanisms at play. Ability to directly visualize how electrons organize themselves in these strongly correlated systems also help reveal important characteristics of these materials, often unexpected in conventional theories of the Kondo lattice. We report ARPES experiments on single crystals of the actinide heavy fermion compound, URu$_{2}$Si$_{2}$ that undergoes a second-order phase transition at 17.5 K, order parameter for which still remains enigmatic. We establish that the ‘hidden-order’ phase transition is associated with an abrupt opening of a hybridization gap leading to the formation of a coherent heavy fermion liquid. This is in contrast to a gradual gap opening scenario via a crossover expected from a Kondo lattice indicating coupling of the heavy fermion state to the hidden order parameter. Next, we describe our efforts at first synthesis of epitaxial thin films of a prototypical mixed valence compound YbAl$_{3}$. Employing \textit{in situ} ARPES we reveal that the temperature dependent change in average Yb valence manifests itself as a dramatic shift in chemical potential leading to a Lifshitz transition at low temperatures. Furthermore, independently estimating temperature dependent changes in Yb valence and Luttinger volume we, for the first time, establish a precise one to one correspondence between \textit{r}-space and \textit{k}-space electronic structure in YbAl$_{3}$ that should be generic to any mixed valence system. We also spectroscopically establish emergence of coherence in the \textit{f}- derived states at $\approx$ 37 K by directly measuring temperature dependent changes in the quasi-particle lifetime and identify dispersive crystal electric field (CEF) split states. We describe how our photoemission results can help us understand results from transport, thermodynamic and quantum oscillation measurements on this system. We conclude with exciting prospects and new directions, such as dimensionality control of effective hybridization in \textit{f} electron systems that has become a possibility with the advancement in synthesis and spectroscopy techniques, and in particular by a combination of the two.