Tuning In Situ: Articulations of Voice, Affect, and Artifact in the Recording Studio 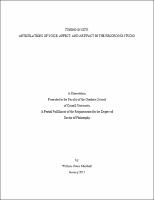 This dissertation examines practices of digital vocal tuning in the fields of audio engineering and music production. Drawing on an ethnographic study of two Los Angeles recording studios, it accounts for the recorded voice, and the tools used to shape it, as a collective sociotechnical accomplishment. It begins by tracing how recording engineers have historically thought about and worked with “emotion,” specifically with respect to its relationship between the studio’s technological artifacts and the voice of their client. It goes on to examine two major digital tuning tools – Auto-Tune and Melodyne – in terms of their initial development and the different technological prescriptions they brought to the technological problem that would eventually come to be known as “pitch correction.” It first traces the ways that recording engineers developed for working with, problematizing, and repairing digital tuning techniques understood in terms of a “covert” and “corrective” approach. It then looks at the various ways that pitch correction was repurposed as an “overt effect,” primarily by non-engineers such as songwriters, performers, and listeners. We then “zoom-in” an instance of corrective tuning as an interactional accomplishment that draws upon techniques of inscription, repetition, and inflection. The remaining chapters take as their starting point the distinction between “place” and “time” theories of pitch perception in psychoacoustics and signal processing, in an attempt to thicken and ethnographically respecify the ways that place and time are structured and performed in-studio. This respecification provides a more adequate understanding of how the objects of digital tuning (i.e. the tuning technologies as objects and vocal performances as objects of tuning work) are practically constituted in two senses. The first of these is the topical structure of the recording studio, or the way that studio life is performed through various acts of place-making. The second concerns the temporal structure of studio life, taking up the various ways of keeping, making, and marking time in the studio. In the Appendix I draw on observations of studio life in order to develop the concept of the “shibboleth” as a complementary concept to boundary objects and boundary work, as well as a new way of thinking about the mutual production of social and perceptual difference in STS.