STUDY OF THE SELECTIVE GROWTH OF THIN FILMS: EFFECTS OF A THIRD SPECIES IN ATOMIC LAYER DEPOSITION 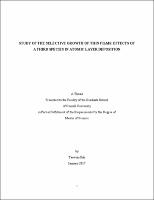 Electronic devices and their constituents have scaled down over generations for higher performance, lower power consumption, and continuation of Moore’s Law. As their nanostructures emerge in forms of 3D and more complex geometries, precise control is highly desirable when constructing integrated circuits in semiconductors. Thus, deposition of thin films on dielectrics without affecting metal regions and vice versa is favorable. Atomic layer deposition (ALD) has exhibited the ability to grow uniform and conformal films of controlled thickness and composition. With these advantages, ALD is a good candidate to achieve selective area deposition for future semiconductor devices. Previous research has been conducted using solution-phase site-blocking layers and/or photolithography for patterning. In this thesis, a process that is more compatible with existing manufacturing lines in industry is studied. In an ALD cycle, we introduced a third species called a co-adsorbate which is proposed to bind to one surface but not the other, disrupting deposition of the metal precursor via competitive and/or reversible adsorption. Ethanedithiol (EDT) was used as one of the co-adsorbate species for intrinsic difference in affinities of thiol functional group towards SiO2 and Cu surfaces. Under an appropriate partial pressure of EDT, chemisorption of a metal precursor, tetrakis(ethylmethylamido)zirconium (TEMAZ), was completely blocked on Cu without disturbing growth on the other substrate, for one set of conditions. X-ray photoelectron spectroscopy confirmed the presence of sulfur only on Cu, indicating that EDT acted as a good site-blocking layer on the metal surface. We used another co-adsorbate, triethylamine (TEA), to study its role in an adsorption reversing and/or site-blocking process. TEA has an analogous chemical structure as the ligand of TEMAZ. In excess of TEA, the extent of dissociation of TEMAZ on a surface will likely be minimized leading to desorption, or reversed adsorption, of TEMAZ. At a high partial pressure of TEA, growth inhibition on the two surfaces was observed while at a lower pressure of TEA, selective deposition of Zr was achieved. Experimental conditions for the latter were then used for a 1½ cycle study. Not only the type of the co-adsorbate, but also the effect of the partial pressure ratio of TEA to TEMAZ and substrate temperatures were also investigated. Three substrate temperatures of 120, 150, and 180 °C along with no, low, and high partial pressure of TEA were studied. Generally, less deposition was observed at higher temperatures, while the presence of TEA completely suppressed, if at all, chemisorption on Cu. Reduction of the reactivity of a metal precursor by adduct formation may also help achieve selective area deposition. Trimethylaluminum (TMA) and water is the most well-studied system in the ALD community, and TMA is known for its high reactivity due to an empty p orbital of the Al atom. Preliminary density functional theory (DFT) calculations of the effect of formation of a Lewis acid-base complex are reported in this thesis in collaboration with the DiStasio group.