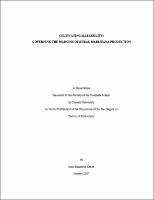 This dissertation explores how and with what effects marijuana and its subjects are governed in a rural region of northern California. I argue that in this region, the governance of marijuana is both constituted through and generative of a politics of illegibility. Although the region is home to a robust marijuana industry that contributes directly and indirectly to the local economy, public officials know little about its impacts, and considerable effort is made to ensure that the industry remains unknowable. In contrast to state projects in which the legibility of populations, practices, and places is a critical dimension of rule, the marijuana industry in rural California is constituted as an unknowable dimension of the local economy in order to preserve dominant ideologies that take marijuana to be both immoral and a source of social denigration. While the illegibility of the marijuana industry is partly an effect of its status as an informal economy, this status is reinforced if not solidified through practices of moral regulation and counter-hegemonic struggle.