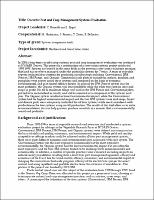 In 2001 a long-term cucurbit crop systems pest and crop management evaluation was continued at NYSAES Geneva. This project is a continuation of a sweet corn systems project conducted 1995-1999. Systems are located in the same fields as the previous sweet corn evaluation meaning that land has now been managed under the particular systems for 7 years. A team of vegetable experts evaluated four systems for producing cucurbit crops including Conventional, IPM Present, IPM Future, and Organic. Commercial scale plots of cucumbers, melons, zucchini, and pumpkins were grown under these systems and compared on the basis of economic, environmental, and pest control efficacy factors. In general the IPM Present system was the most profitable, the Organic system was least profitable while the other two systems were mid range in profit. No-till or minimum tillage was used in the IPM Future and Conventional plots, proved to be inconsistent in results, and will be removed as a component of the systems next year. The Organic system resulted in lowest environmental impact, while the Conventional system had the highest environmental impact and the two IPM systems were mid-range. Insect and disease pests were adequately controlled for all four systems while weeds interfered with production in the two systems using no-till production. The results of this trial allow us to make recommendations that can help growers produce cucurbits in a manner that is environmentally sound and profitable.