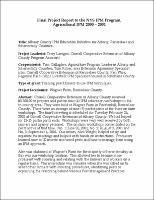 Cornell Cooperative Extension of Albany County received $3,300.00 to prepare and put on four (4) IPM education workshops in the tri-county area. They were held at Wagner Farm in Poestenkill, Rensselaer County. There were an average of nine (9) participants at the three on farm workshops. The fourth meeting is scheduled for Tuesday February 26, 2002 at Cornell Cooperative Extension of Albany County. We had hoped for 12-15 participants each. Workshops were very well received by both farmers and agency personnel. The on farm workshops concentrated on the pests active at that time. No. 1: June 26, 2001, No. 2: August 3, 2001 and No. 3: September 4, 2001. Our intern, Alex Wright, helped set up and organize the meetings and helped with hands on instructions. Producers learned how to ID insects and weed pests and how to manage them using an IPM approach.