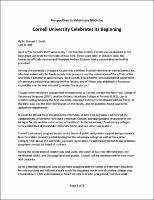 One April 27, 2015, Cornell University celebrated Charter Day in honor of the 150th anniversary of its founding. Though other veterinary colleges had emerged prior to Cornell, James Law is credited with graduating the first university-educated DVM in the U.S. named Daniel E. Salmon in 1876.