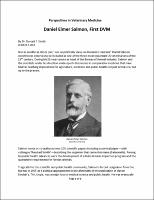 Daniel Salmon DVM (Cornell 1876) deserves to be included as one of the three most important US veterinarians of the 19th century. During his 22-year tenure as head of the Bureau of Animal Industry, Salmon and the scientists under his direction made epoch discoveries in comparative medicine that have had far-reaching implications for agriculture, medicine, and public health not just in that era, but up to the present.