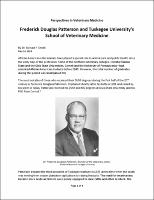 The most notable African-American who received a DVM degree during the first half of the 20th century is Frederick Douglass Patterson. African-American veterinarians have played a special role in animal care and public health since the early days of the profession.