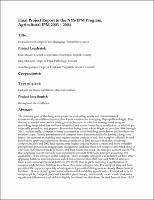 The primary goal of this long-term project is evaluating yearly soil amendment of commercially-available composts plus 3-year rotation for managing Phytophthora blight. This disease is a major concern for many growers because an effective management program (including fungicides) has not been identified and severe losses have resulted in cucurbit crops, especially pumpkin, and pepper. Research is being done where blight occurred in 1999 through 2001. Additionally, compost is being examined as a soil-building amendment and fertilizer for rotation crops. Yearly amendments of compost were demonstrated to be having a long-term impact on nutrient availability and organic matter content of soil. Soil samples collected in mid June before applying compost or chemical fertilizer in 2003 revealed that plots receiving compost in 2001 and 2002 had significantly higher organic matter content and more available phosphorus, potassium, magnesium, manganese, and zinc than non-compost-amended plots. In conclusion, amending soil with compost yearly is having a long-term impact. Compost appears to be a suitable source of nitrogen to at least partly replace chemical fertilizer.