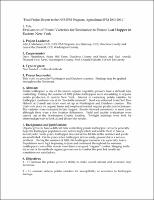 Potato leafhopper is one of the insects organic vegetable growers have a difficult time controlling. During the summer of 2002 potato leafhoppers were devastating to organic potato production in eastern New York. Interest in evaluating potato varieties for leafhopper resistance was at its “teachable moment”. Seed was obtained from Prof. Don Halseth at Cornell and trials were set up in Washington and Dutchess counties. The trials took place on organic farms and employed normal organic production techniques. The varieties were evaluated in late August. Results showed consistency in most cases although there were a few location differences. Yield and quality evaluations were carried out at the Washington County location. Twilight meetings were held for interested growers to look at and discuss the results.