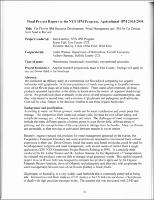 We conducted an efficacy study at a commercial cut flowers field comparing two organic herbicides with glyphosate. A diverse population of weeds was growing in the paths between rows of cut flower plugs set in holes in black plastic. Three weeks after treatment, all three products appeared equivalent in the ability to knock down the weeds; all appeared dead except clover. Re-growth took place eventually in the clove oil and pelargonic acid treated plots, and they were treated a second time, with a mixture o f glyphosate and pelargonic acid herbicides. Cost will be a key feature in the decision whether to use these organic herbicides.