CVM Hooding Ceremony (1999-present)
JavaScript is disabled for your browser. Some features of this site may not work without it. 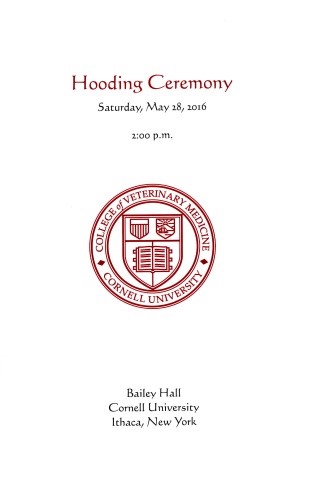 The College of Veterinary Medicine conducts a special Hooding Ceremony during Cornell University’s Commencement. Initiated during Dean Robert D. Phemister’s first term dating from 1985, students are draped with academic hoods and awarded their Doctor of Veterinary Medicine degrees. Hooding Ceremony program booklets include the list of names of all graduating D.V.M. students and those matriculating with Distinction.

Beginning in 2008, several of the most prestigious prizes given to fourth-year students are awarded at this Ceremony. This includes the Horace K. White Prize, probably the University’s longest-standing prize dating from 1873.