Planning for Urban Biodiversity in a Divided World 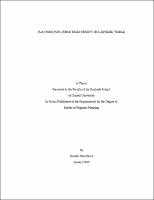 Despite over two decades of effort, biodiversity loss has persisted at increasing rates. Interests focus on protection of key habitats, while the drivers of biodiversity loss continue unabated. With repeated failure to meet biodiversity targets, we need to investigate more integrated ways to stop biodiversity loss. Traditional local land-focused biodiversity conservation creates conflict and ignores wider-reaching impacts. A more promising approach considers the entire system of impact and dependence between cities and humanity, a concept herein named the bioshed. The bioshed expands the conversation around biodiversity preservation to include a wide array of dependencies of humans on biodiversity. This initial survey explores how urban biodiversity planning today connects the broad array of issues interrelated to biodiversity, if at all. It asks three questions: (1) how strong is the concept of biodiversity within urban plans, (2) do biodiversity plans consider the complete bioshed in the urban context, and (3) do frameworks for biodiversity planning include all aspects of the bioshed? To answer these questions, I looked at 65 plans from cities worldwide, 48 of which are biodiversity plans, and four guideline programs each with over 30 city participants. As a mixed models/mixed methods study, I combined automated lexical analysis with manual term searches and categorization of concepts. I developed a simple integration index to allow for direct comparison of various plan and guideline documents. I found that biodiversity is rarely used, inconsistently defined, and lacks strong connections to any particular set of related themes.