Stucky, Steven
JavaScript is disabled for your browser. Some features of this site may not work without it. 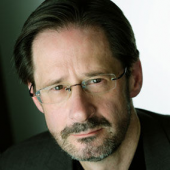 Composer Steven Stucky, whose Second Concerto for Orchestra earned him the 2005 Pulitzer Prize in music, has written commissioned works for many of the world’s great soloists and for the orchestras of Baltimore, the BBC, Chicago, Cincinnati, Dallas, Minnesota, New York, Philadelphia, Singapore, St. Louis, Washington (National), and many others. Recordings of Mr. Stucky’s works have won two Grammy awards, and he has been resident composer at Aspen, the American Academy in Rome, the Bogliasco Foundation in Liguria, and on countless college campuses. He was host of the New York Philharmonic’s “Hear & Now” new-music series from 2005 to 2009, and Vice-Chair of New Music USA and chair of the membership committee of the American Academy of Arts and Sciences. He was a trustee of the American Academy in Rome, and served on the music awards panel of the American Academy of Arts and Letters.