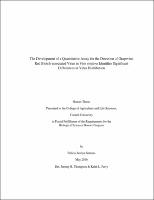 Grapevine red blotch-associated virus (GRBaV) is associated with red blotch disease which undermines optimal growth and development of grapevine (Vitis vinifera). Despite GRBaV’s significant economical and biological impacts, existing diagnostic methods lack sensitivity and consistency. This study has developed, optimized and employed a reliable quantitative Real-Time PCR (qPCR) assay for the detection of GRBaV in a variety of host tissue types. Primers specific to GRBaV and an internal host control (NADP-dependent Glyceraldehyde 3-phosphate dehydrogenase (GAPDH)) were selected for use in qPCR based on their performance in initial validation tests. Controls consisted of 1) the internal GAPDH which served as relative reference of total input DNA and as a marker for template quality, 2) a dilution series of cloned target viral DNA, and 3) negative controls of water and total nucleic acid from uninfected vines. This method was then used to quantify the amount of GRBaV in multiple infected greenhouse- (GG) and field- (FG) grown vines. Absolute and relative quantification methods were shown to be strongly correlated (R2 > 0.84) for both GG and FG. Viral DNA quantities varied in different tissue types and from one plant to another between and within a location, but most significantly between GG and FG, where only 56.0% of the total samples from the latter were determined as positive compared to 98.4% for the former. Petioles were consistently found to contain higher amounts of GRBaV compared to their corresponding leaves (P≤0.0368). Leaves proximal to the main stem were also found to contain higher amounts of GRBaV compared to leaves located in the apical part of the cane (P≤0.0017). Based on these findings, it is recommended that total nucleic acid extracted from multiple petioles of fully developed leaves are used for robust and reliable GRBaV diagnosis using qPCR. The described qPCR assay and recommended sampling procedures will contribute to efforts in GRBaV containment and red blotch disease control.