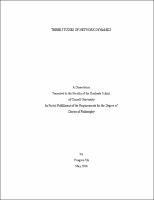 This dissertation examines three topics on network dynamics. The first topic is the polarization and politicization of the scientific consumption in the U.S.. Passionate disagreements about climate change, stem cell research, and evolution raise concerns that science has become a new battlefield in the culture wars. Data are derived from millions of online co-purchases as a behavioral indicator for whether a shared interest in science bridges political differences or selective attention reinforces existing divisions. Findings reveal partisan preferences both within and across scientific disciplines. The paper concludes that the political left and right share an interest in science in general, but not science in particular. The second paper examines the dynamics of organizational membership. A long line of research documents the essential role of social networks in mediating the recruitment and retention of members in organizations. But organizations also comprise a primary context where people form social ties. The paper investigates how the network structure that an organization creates among its members influences its ability to grow and reproduce itself. In particular, we propose that two dimensions of organizational strategy influence affiliation dynamics: (1) the extent to which the organization induces social interaction among its members (social encapsulation), and (2) the time and energy that the organization demands of its members. Results show a curvilinear relationship between membership growth and the rate of social encapsulation. For most types of organizations attaining sustained growth requires a balance between open networks (for recruitment) and network closure (for retention). The third paper explores a structural similarity measure based on bipartite graphs. Simulation analysis holding underlying similarity constant shows that two widely used measures - Jaccard and cosine similarity - are robust to increases in network size but biased by the distribution of out-degree. However, an alternative measure, the Standardized Co-incident Ratio (SCR), is unbiased. We apply SCR to members of Congress, musical artists, and professional sports teams to show how massive co-following on Twitter can be used to map meaningful affiliations among cultural entities, even in the absence of direct connections to one another.