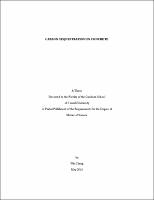 Concern for the environmental impact of increased carbon dioxide in the atmosphere has focused attention on reducing emissions of both natural and industrial carbon dioxide. This thesis explores a method for inhibiting or preventing the oxidation of carbon in plant material by encapsulating biomass in a mortar composed of portland cement, natural sand, and water. The particular biomass in question is bio-char, a pulverized charcoal produced from the pyrolysis of timber cut down due to insect infestation. While some carbon was oxidized during pyrolysis, unless encapsulated to prevent contact with oxygen, the balance of the carbon would eventually form carbon dioxide. Sequestering carbon in a portland cement binder likewise offsets carbon footprint associated with cement production (an essential ingredient in concrete) However, bio-char is a non-traditional ingredient in mortar and concrete with a heretofore unknown impact on the material performance in both the fresh and hardened states. To evaluate the impact of bio-char on fresh and hardened cementitious materials, the bio char was first characterized for particle size distribution, density, and absorption. Mortars were prepared with portland cement, natural sand, and water, with varying percentages of replacement of sand with biochar. Workability was measured via the mortar flow test, air content estimated by the Chace Air Indicator, and hardened mortar evaluated at 1 to 56 days via density, compression strength, and splitting tensile strength. For all mixtures water content was adjusted to maintain a fixed mortar flow. This thesis concentrates on the demonstration and investigation of the impact on mechanical performance including compressive and splitting tensile strength of bio-char mortar when workability of mortar mixture is controlled. The environmental benefit is estimated by means of the author's "carbon sequestration potential", and the trade-off between mechanical performance and environmental benefit demonstrated. Various models are proposed to support hypotheses for the influence of bio-char on mortar behavior. This work has shown that with the workability controlled, compressive and splitting tensile strength decreased exponentially as bio-char content increases. Carbon sequestration potential increases, however with bio-char content, such that production of cementitious materials for various applications is potentially viable for carbon neutral to carbon negative.