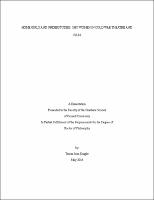 In contrast to studies of U.S. Cold War theatre and film which typically focus on the era's "crisis of masculinity," portrayals of mother-son relationships, and portrayals of dynamic and 'dangerous' women, this project examines constructions of shy young women. Primary play and musical texts, their film adaptations, and original films are read through a lens of feminist materialism and emotional labor, in tandem with mid-twentieth century texts on popular psychology, psychosociology, self-improvement, and sexuality. Such texts show how shyness in young women is negatively constructed as a threat to personal and professional efficiency, as selfishness which breaks familial and social bonds, as a precursor to mental and physical collapse, as a symptom of modern urban alienation, as a sign of emotional vulnerability, and as a tool for infiltration. The shy girl's weakness thus rhetorically links her with other 'threats' to national security in the early Cold War era: communists, racial/ethnic Others, homosexuals, and other subalterns. Consequently, these suspicions about shyness lead to the physical, mental, and emotional disciplining of young women who would otherwise pursue solitary and independently meaningful interests.