Integrated Piezoelectric Transducer Arrays For On Chip Communication And Sensing 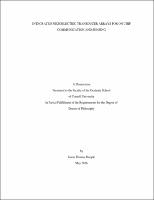 Most modern computer systems are fabricated using CMOS technologies. These systems utilize metal wire interconnects to communicate between different computational blocks. As these systems scale to smaller critical dimensions, new technologies are needed to increase computational power and efficiency as well as overall system capability. Moore's Law, an observational rule which states that the number of integrated transistors on chip doubles every 18 months, has long been responsible for these advancements in computer systems. Revolutionary new technologies could allow for an increase in computer systems with so called "More than Moore" improvements to system functionality and performance. This dissertation presents a novel integrated CMOS technology for generating, and sensing ultrasonic waves in the silicon substrate of CMOS chips. The technology advancement which has made such a system possible is the advent of CMOS compatible piezoelectric materials, specifically aluminum nitride. Thin film ultrasonic piezoelectric transducers are fabricated on silicon and used to generate and detect ultrasonic waves at frequencies in the 1-3 GHz range. One application for this technology is a novel communication pathway for CMOS circuits which uses the silicon substrate as a channel for which to communicate data to another physical location on the chip. The speed of sound in silicon (~8433 m/s) results in ultrasonic wavelengths in the range of 10 [mu]m to 1 [mu]m (1 GHz to 10 GHz), allowing for the use of far field communication techniques such as phased arrays for software reconfigurable channels. Ultrasonic waves are modulated at a frequency of 2.7 GHz and used to communicate at a data rate of 120 megabits per second. An additional application of this system is a measurement system which can be used to characterize the ultrasonic properties of various materials. Such a system is developed to measure a human fingerprint. When an ultrasonic wave reflects off of the silicon surface the amplitude and phase depends on the material on the other side. Measurements conducted showed signal levels of 700 [mu]V at the valley of a fingerprint and on the order of 300-400 [mu]V at a fingerprint ridge ridge, showing a measureable contrast which could be used to image a fingerprint.