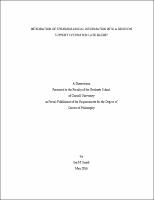 A web-based decision support system (DSS) for potato and tomato late blight management has been developed which links several models into a system that enables prediction of disease dynamics based on weather conditions, crop information, and management tactics. Growers identify the location of their production unit of interest (latitude and longitude of field), and the system automatically obtains observed weather data from the nearest available weather station, and location-specific forecast weather data. The BlightPro DSS uses these weather data along with crop and management information to drive disease forecasting systems and a validated mechanistic model of the disease to generate location-specific management recommendations for fungicide application. To evaluate the utility of the BlightPro DSS across a range of environments, a combination of computer simulation and field experiments was conducted. Three fungicide schedules were evaluated i) calendar-based (weekly) applications, ii) applications according to the DSS, or iii) no fungicide. Simulation experiments utilized 14 years of weather data from 59 locations in potato producing states. In situations with unfavorable weather for late blight, the DSS recommended fewer fungicide applications with no loss of disease suppression, and in situations of very favorable weather for late blight, the DSS recommended more fungicide applications but with improved disease suppression. Field evaluation was conducted in 2010, 2011, 2012, and 2013. All experiments involved at least two cultivars with different levels of resistance. DSS-guided and weekly scheduled fungicide treatments were successful at protecting against late blight in all field experiments. As expected, DSS-guided schedules were influenced by prevailing weather (observed and forecast) and host resistance and resulted in schedules that maintained or improved disease suppression and average fungicide use efficiency, relative to calendar-based applications. A preliminary dispersal-risk model for late blight was developed using data obtained experimentally and from the published literature. The model relates availability of sporangia of Phytophthora infestans produced from lesions in a crop canopy to relative numbers of sporangia in the air above the crop (dispersal-risk). The model uses field-based estimates of disease severity coupled with functions that describe the effect of meteorological elements on production of sporangia, release of sporangia from sporangiophores, and escape of sporangia from a potato canopy. For each potential risk period the estimated disease severity at the source is coupled with predictors for sporangia availability, release of sporangia, and escape of sporangia. These predictors are then integrated in the form of a linear model to predict the relative number of sporangia h-1 that will escape the potato canopy and become available for dispersal. With field-based estimates of disease severity at a known source of late blight, variation in numbers of sporangia above the crop canopy was well described (P < 0.0001) by the dispersal-risk model (R2 = 0.91; RMSE = 2.86 sporangia h-1). The model is intended for use within the context of the BlightPro DSS. Knowledge of upcoming "high risk" periods for dispersal could be used to enhance the efficiency of disease management practices.