Plant-Mimetic Generation Of Negative Pressure In Water: From Fundamental Thermodynamics To Applications In Transport And Heat Transfer 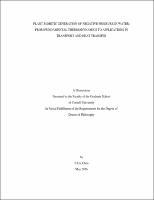 When the pressure of a liquid is reduced below its saturation pressure, instead of forming vapor, the liquid can exist in a metastable state; at pressures below zero, the liquid becomes stretched and is under tension. This metastable liquid will eventually cavitate and return to stable equilibrium with vapor as the pressure falls to the stability limit. The behavior of water under tension and its cavitation limit are relevant to various topics in real life, e.g. the ascent of sap flow in trees. Also, scientists have pursued the use of liquid at negative pressure in technologies, e.g. synthetic 'trees' that allowed for water transportation with large negative pressure gradient ([GREATER-THAN OR EQUAL TO]21MPa). Fundamentally, a picture of the structure of water's phase diagram remains incomplete. To help elucidate the debate, researchers have used various techniques to place liquid water under tension to measure its properties; however experimental measurements for water stability limits obtained with different techniques show a large scatter. This dissertation reports the design and operation of a plant-mimetic experimental system which enables tests of water stability limits by the metastable vapor-liquid equilibrium method with nanoporous silicon membranes. This system provides a practical platform to place static, bulk volumes of liquid into metastable region that can be studied, manipulated and coupled to existing technologies. Also presented is the design and analysis of superheated loop heat pipes (SHLHPs); the SHLHP captures the main attributes of transpiration in trees. A steady-state model was developed for both conventional LHPs and SHLHPs; our analytical model shows that SHLHPs could exploit negative pressure working fluid to achieve efficient heat transfer over long distance and against large acceleration, and extend the limitations of conventional LHPs imposed by thermodynamic properties of the working fluid. Finally, this dissertation presents the development of SHLHP prototypes. A central challenge in the experimental realization of SHLHPs is the membrane that allows reliable use of liquid in metastable regions. Two-layer silicon membranes were fabricated to from MEMS-based SHLHPs. Also introduced is an experimental system designed to study SHLHP performances, enabling us to demonstrate the use of liquid at negative pressure in heat transfer technologies.