Genetic Characterization Of The O. Rufipogon Species Complex And Construction Of Interspecific Pre-Breeding Resources For The Rice Improvement 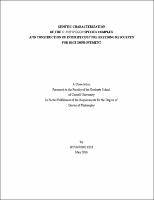 The Oryza rufipogon species complex (ORSC), comprised of O. rufipogon, O. nivara, and O. spontanea, as well as hybrid and admixed combinations of these three wild species, is considered to be the immediate ancestor of cultivated Asian rice, O. sativa. Thousands of accessions of the ORSC are maintained in gene banks around the world, but most are poorly characterized, making it difficult to utilize them effectively for rice improvement. Using genotyping-by-sequencing (GBS) for nuclear DNA and Sanger sequencing of chloroplast DNA, this dissertation identifies six subpopulations within the ORSC based on both model-based and distance-based clustering methods. Three wild groups were genetically and geographically closely related to the O. sativa subpopulations, indica, aus and japonica, while the other three wild groups were both genetically and geographically divergent. The genetic subpopulations were found to be significantly correlated with traditional species designations, O. rufipogon (perennial) and O. nivara (annual), which are historically differentiated based on ecomorphological characteristics. Genetic relationships between domesticated and wild subpopulations suggest that the cultivated aus subpopulation derives from an annual wild relative, japonica derives from a perennial ancestor, and indica from an admixed population of annual and perennial wild ancestors. A wild diversity panel consisting of 95 purified (inbred) accessions representing the range of variation in the ORSC was developed as the basis for future genetic studies. In addition, three accessions from divergent subpopulations of the ORSC were selected as donor parents and used to construct six BC5-6F1 libraries of interspecific chromosomal segment substitution lines (CSSLs) by crossing them each with two high-yielding O. sativa recurrent parents (an elite indica and an elite tropical japonica) using marker-assisted backcrossing. The CSSLs were then evaluated for morphological traits related to domestication, including seed shattering, presence of awns, anther color, and basal leaf sheath color. Of these four phenotypes, basal leaf sheath color (BLSC) is related to abiotic stress, and pigmented stems were found in a majority of wild rice accessions, and more frequently in aus and indica than in other cultivated subpopulations. Using the CSSLs, quantitative trait loci (QTLs) for BLSC were detected on chromosome 1 (qBLSC-1), 4 (qBLSC-4) and 6 (qBLSC-6) in the CSSLs. In a genome wide association study of BLSC, the qBLSC-6 locus was found to be the major QTL associated with stem pigmentation in the O. sativa indica subpopulation. This result demonstrates the value of the CSSLs for genetic studies, particularly for understanding domestication-related traits, and as a potential source of useful variation for applied rice improvement.