Diversity, Ecology, And Conservation Of Bird Communities Of Polylepis Woodlands In The Northern Andes Of Peru 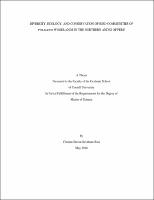 Montane birds are sensitive to a wide variety of human activities, among which climate change is of special concern. Among the most diverse and specialized montane bird communities is that of Polylepis forests in the High Andes (> 3,500 m). Unfortunately, the ecology of birds associated with Polylepis forest, especially endemic and threatened species, remains poorly known. This gap in knowledge is worrisome given that climate models project that future conditions will be warmer and drier, which could negatively impact many of the species in this ecosystem. This research investigated patterns of species richness and bird-habitat relationships across along an elevational gradient (~3,300 - 4,700 m) and across wet-dry seasons in five valleys of Huascaran National Park within the Cordillera Blanca range of Peru. In 2014-2015, birds and habitat characteristics were surveyed at 130 point count locations and systematically observed between points during wet and dry seasons. I calculated observed and expected (Abundance-Coverage Estimator) species richness for valleys, seasons, and within 100-m elevational bands. Estimates of species richness exceed those of previous studies in Polylepis forest along the Andes. There was a consistent pattern of greater species richness in wet compared to dry seasons, though the pattern declined in strength with elevation. Species richness peaked at mid-elevations (~4,000 m) for the overall bird community, while the greatest number of endemics and threatened birds were found at ~4,300 m Polylepis forest was a particularly important habitat that seemed to promote diversity and might provide an important refuge for species in the face of climate change. ii Species-habitat associations of 50 species of birds, including 13 of conservation priority, showed that birds were associated with four habitat types. Four species of conservation priority (Oreomanes fraseri, Poospiza alticola, Atlapetes rufigenis, and Cranioleuca baroni) were strongly associated with structural characteristics of large forest patches (~10 ha) dominated by P. sericea (<3,800 m), whereas another four (Anairetes alpinus, Leptasthenura yanacensis, Zaratornis stresemanii, and Scytalopus affinis) were associated with less disturbed forests of P. weberbaueri (> 4,200 m). Open Puna and shrubland habitats also maintained a high number of most common species. These results suggest that, although declines in species richness during dry seasons may negatively affect certain species under the projected warmer and drier conditions for this region, Polylepis forest fragments might provide important refuge or buffering against future changes in climate. Moreover, in addition to conserving and using large (>10 ha) P. sericea forests at lower elevations as the cornerstone for maintaining bird diversity, any high elevation (> 4,200 m) relicts of P. weberbaueri, irrespective of size, should be prioritized for conservation in order to protect key habitat of threatened avian species in Cordillera Blanca. Population studies of priority bird species, combined with coordinated monitoring, will provide important insights into the response of bird populations to human activities and climatic changes and help to inform conservation of High Andean biological diversity. iii