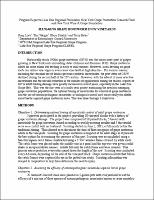 Historically (early 1900s) grape rootworm (GRW) was the major insect pest of grapes growing in New York and surrounding states (Johnson and Hammar 1910). Grape rootworm adults do some minor leaf feeding in early to mid-summer. However, larval feeding on grape roots can reduce vine vigor or even cause vine death at high densities. For various reasons, including the seasonal use of broad-spectrum synthetic insecticides, the pest status of GRW declined during the second half of the 20th century. However, with the advent of more selective insecticides and the overall reduction in the number of applications during the season, reports of GRW adult feeding damage have greatly increased in recent years, especially in the Lake Erie Grape Belt. This was the first year of a multi-year project examining the need for managing grape rootworm populations, the optimal timing of insecticides for control of grape rootworm and the use of entomopathogenic nematodes (a biological control used successfully for alfalfa snout beetle) against grape rootworm larva. This was done through 3 objectives.