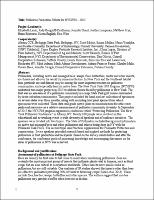 Pollinators, including native and managed bees, wasps, flies, butterflies, moths and other insects, are threatened all over the world by numerous factors. In New York and the Northeast habitat loss, pesticide use and disease may be among the most important stresses on pollinator communities, and especially hard on native bees. The New York State IPM Program (NYSIPM) undertook two major projects in 2015 to address threats faced by pollinators in New York. The first was an assessment of a pollinator community in a large State Park golf course surrounded by dense suburban communities. This project included the hand-and-net collection of specimens on several dates over three months, along with recording host plant species from which specimens were collected. These data will guide native plant recommendations for other state parks and may serve as a relative measurement of pollinator community diversity. In September of 2015 the NYSIPM program organized a conference titled “Protecting Pollinators: The New York Pollinator Conference” in Albany, NY. Nearly 100 people were involved in this educational and networking event: a wide diversity of speakers and of audience members. The speakers were divided into two topics. The State of Pollinators included background information on native and managed bees and other pollinators and what is being done in NY with the Pollinator Task Force. The second topic was Practical Applications for Pollinator Protection and conservation. Seven speakers provided research based and applied methods for protecting pollinators in fruit production and backyards. Based on the survey results before and after the conference, the conference goals of increasing knowledge and encouraging discussion on the issue of pollinators in NYS was achieved.