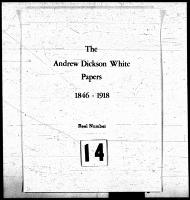 At the state legislature Mr. Cornell was attacked once again. On May 20 an amendment was moved providing for further investigation as to whether agriculture and mechanic arts are taught at Cornell University. A. B. Cornell asked permission to add that the commission should inquire into the management of the Cornell University in all its parts. Summer found the university host to the investigators, and White abandoned plans to go abroad in order to defend the institution and to find several new professors for the fall term. Esteban Fuertes for civil engineering and Isaac P. Roberts for agriculture were the professors finally elected. In September White sent the executive committee of the trustees a protest against a substitution of securities in the Cornell Endowment Fund made in his absence and without his knowledge, and on September 13 he wrote Cornell asking for land scrip facts. Some letters of interest are those from Senator Justin S. Morrill on August 12, from Henry W. Sage on September 5 about a mixup of hats, and on September 14 from Dr. William Alexander Hammond, proposing a Cornell Medical College in New York City. On the 22nd White wrote Daniel C. Gilman to see if he would be interested in becoming the Cornell president.