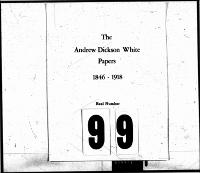 Among scientific men supporting Smithsonian candidates are Angell, Alexander Graham Bell, and Jordan, and there are letters about the late Samuel Pierpont Langley from Cyrus Adler. George Foster Peabody wrote about the denominational trial of a liberal minister, and there are several letters asking White's intervention in appeals made to Carnegie and Mrs. Russell Sage. There are letters arranging for White to address a meeting at a Philadelphia synagogue in memory of John Hay. White and Goldwin Smith wrote in support of military drill as a part of the university curriculum, and Robert Hope-Jones and his associates in Elmira sought a contract to rebuild the Sage Chapel organ. A number of letters concern memorials planned at other institutions in which White had a particular interest.