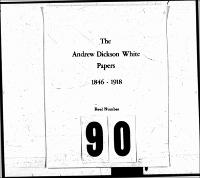 The months covered on this reel White spent in the United States. He was in Ithaca for commencement and the trustees' meeting at which the School of Forestry was abolished, and went to Yale to address his class at its 50th reunion. Some weeks in Maine are chronicled in letters to Mrs. Evans and Gilman. On August 29th Butler commented on Halls' sudden death and the situation in Manchuria as well as the new school of journalism being established by Joseph Pulitzer at Columbia. White agreed to become a trustee of the school. John Brinkerhoff Jackson wrote from Athens on May 19th about the unrest in the Balkans, and on August 28th Straus added his views. White recommended a number of men to the President for political appointment, and a letter from Governor Odell of New York shows White had commended him for denying clemency to some convicted murderers. A complete list of grants made by the Carnegie Institution in its first year is dated July 20.