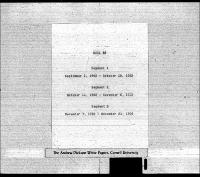 White represented Yale at the Bodleian Tercentenary celebration at Oxford on October 9, and was given an honorary doctor of civil laws degree. Two weeks later he received a degree from Carnegie at St. Andrew's University in Scotland. On his return to Berlin he was showered with honors, culminating in a final audience with the Kaiser, who presented him with the Empire's Medal for Science and Art. Because of his announced intention to resign on his 70th birthday in November, he was invited by Yale, Chicago, California and Cornell to deliver university lecture series, and Henry Holt and Scribners joined the publishers who sought books and articles from his pen. There are many letters to and from George F. Comfort and White family members about the controversy over the Syracuse monument. White joined the fight with a barrage of letters in the local papers.