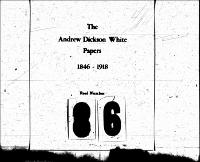 Educational subjects predominate on this reel. The Carnegie Institution attracted a number of early requests for support of projects, and White sought Carnegie money on behalf of President Wheeler of Berkeley. There are references to the announced Rhodes scholarship program; Eliot wrote that Harvard would confer an LL.D. on Prince Henry; and Gilman wrote that Johns Hopkins had honored White with that degree in absentia. Cornell topics include the location of a new physics building on the campus, a snit against the Adirondack forestry project, and the circulation of library books. There are a number of letters about the honors accorded the visiting Prince Henry in America and the diplomatic relief expressed when his tour ended and he was safely on shipboard en route home. There is a beginning of much correspondence regarding the expulsion from Frankfort-on-the-Main of two naturalized American families. There were many letters from Syracuse about the possible condemnation of a large property owned by the White family as a site for a new county court house.