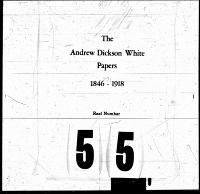 White's candidacy for the gubernatorial nomination in New York State is the principal subject of this reel. Most of his friends urged White's acceptance, but a few newspaper clippings throw doubt on Thomas Collier Platt's backing him. Frederick W. Holls wrote on June 30 of the financial drain a candidate must be prepared to accept. David Starr Jordan wrote several letters about Stanford University plans. On May 23 he wrote, My educational views are the lineal descendents of yours, and on the 27th he announced his hope to lure several faculty members from Cornell to Palo Alto. Edward H. Magill wrote that he would like Horatio S. White to be Swarthmore's president. A friend of George T. Winston wrote to suggest that Cornell bestow an honorary LL.D. on the early Cornellian who had been made president of the University of North Carolina. A letter from Straus on April 14 concerned his plan to start a trade school for young Russian immigrants who were pressing into the cigar and cloak-making trades. He wrote that aside from being crowded and underpaid these pursuits kept people in New York, where they lived as in a Ghetto. White and F. J. Garrison exchanged letters in June regarding protests to the Russian government on behalf of the Jews.