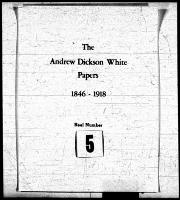 As a state senator White received many requests for political appointments and documents directed to him as chairman of the education committee. His committee codified the state's education laws and established four normal schools. He also served in an investigation of corruption in the New York City Health Department. Months of effort by White and the senator from Tompkins County, Ezra Cornell, secured the Morrill Land Grant scrip for the support of a new university that would incorporate instruction in agriculture and mechanic arts in an expanded traditional curriculum. The bill chartering Cornell University appears at the date of its signing, April 27, 1865. Though the documents continue to reflect White's second term in the Senate, his interest turned toward the building of the university. A regular exchange between White and Cornell reveals both the men and their diverse concerns for the new institution. They visited several campuses and wrote college administrators for advice. Their investigations led to the building committee report to the university trustees on March 14, 1866.