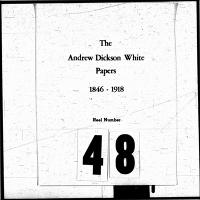 Among the letters of sympathy that continue on this reel was one from George von Bunsen on August 18 that termed the alliance between Russia and France a threat to Germany and to the peace of Europe. Stricken by his bereavement, White spent much of the late summer in reading old letters and diaries, finding a sculptor to carve a memorial statue of his wife, and preparing a small memorial volume to be printed privately and distributed among her friends. At the American Social Science Association meeting in Saratoga in September White was delighted with the talk given by young Helen Magill, a professor of ancient languages at Evelyn College, Princeton. He invited her to visit Cornell to consider the position of principal of Sage College. Though she declined the position, she entered into a regular correspondence with White. Only Miss Magill's letters survive in the collection. In the late fall he revised his lectures on the French Revolution and, after delivering the series at Cornell, made some additions and presented them at Johns Hopkins in January. On February 3rd a group of distinguished men sent White an invitation to give the lectures in Washington. Senator Morrill wrote that White's name had been proposed in the Senate as a regent of the Smithsonian Institution.