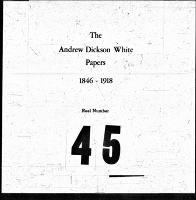 White's months abroad are recorded on this reel. A number of scholars appeared among the correspondents including James Bryce, George von Bunsen, and Lord Acton, said by Bryce to know more than any other man in England. A large part of the letters were from Burr, who was doing research for his doctoral thesis as well as hunting for books and manuscripts for White's library. He reported in detail the universities, monasteries and bookshops he examined, and listed the items he thought White would want to buy. Described by White as the one living genius graduated from Cornell during his years there, Burr revealed an engaging character as well as erudition. His command of Latin and modern languages was so thorough that he was able to uncover a number of highly valuable manuscripts and incunabula. Adams' forceful administration during his first year at Cornell was recorded in a steady flow of letters from Ithaca. White's bitter disappointment in Adams' inaugural address is documented, and, although Adams consulted him on many administrative matters, the new president was clear in his intention to follow his own plans. On June 18 he announced that he had altered the policy toward honorary degrees and dormitories. Commenting on the general increase in faculty salaries Hiram Sibley wrote, If the founder of the university and its principal contributors had in early life spent a modern professor's salary they would have had no money to give. Syracuse business matters and the progress of the McGraw-Fiske suit were frequent subjects.