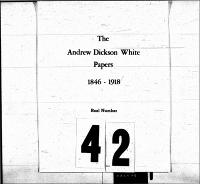 White's poor health, the drudgery of administration, and a desire to prepare his historical lectures for publication combined to make him determine to resign the presidency of Cornell and turn his attention to independent literary work. His last months at Ithaca were spent in advancing three projects. First was his urging Sage to build a library, to which he agreed to turn over the bulk of his private historical collections. Second was the selection of a professor to head the reorganized Sibley College of Mechanic Arts, and third was the search for a man to fill the new chair of moral philosophy. An instructor of elocution was added to the faculty, and arrangements were made for a series of lectures on journalism. President Cleveland's first appointments were closely watched by the civil service reformers. legislation discussed in the papers included a bill to establish experiment stations at agricultural colleges, a freedom of worship bill referred to on February 4, and a number of proposals by the American Forestry Congress.