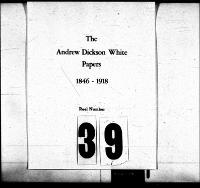 Republican politics dominates the correspondence in May and early June. Many of White's friends seriously considered him a candidate, and many predicted a Republican defeat if either Blaine or Arthur were nominated. Under the date of May 2 a former student reported from the inside the effects of the spoils system in the operation of the New York Customs House. Hiram Sibley pledged nearly $80,000 for the extension and maintenance of Sibley College of Mechanic Arts and the university announced the first seven fellowships available from a fund that had been designated for that purpose in the early days of the school, when it seemed unlikely ever to materialize. White sought to persuade Leland Stanford to endow a nationwide program of university fellowships to perpetuate his son's memory while improving the quality of American scholarship. White's choice for alumni trustee was elected, and Memorial Chapel progressed. White wrote Fiske at length about the symbolic details in the English stained glass windows, and an undertaker's letter discusses the condition of the caskets to be removed to the chapel crypt. Other correspondents are F. A. P. Barnard, Federico Garlando, Pullman, and Robert H. Thurston.