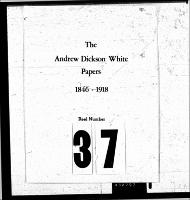 The Fiske suit shocked a number of correspondents, but a letter from Evans in Munich expressed an understanding of Fiske's reasoning. The university had an increased student body, and the financial health of the school had improved. The correspondence contains White's negotiations with artists and craftsmen in regard to the construction of three memorial windows for the chapel, and there are a number of inquiries and recommendations concerning appointment of a physical culture instructor for the new gymnasium. Cornell was invited to take part in a conference of eastern colleges to consider common regulation of intercollegiate sports competition. An increasing number of friends suggested that White run for the Senate. On November 27 Horace K. White announced the forming of a new newspaper in Syracuse in the family, and suggested that Andrew now had an organ if he wants to go to the Senate.' On January 17 a writer proposed a Republican ticket of General Sherman for President and White for Vice-President.