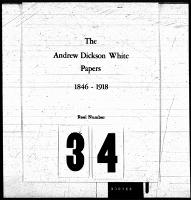 Political attitudes among New York Republicans after the Democratic victory were reflected in increased activity for civil service reform. A December 19 letter suggested that the Senate chair was merely being held by the present incumbent until White was ready to take it; one on the 22nd was from a man who wanted to see a college president in the White House. Questions about college administration came from Columbia, Emory, McGill, the University of Kansas, and the Massachusetts College of Agriculture. Randall Lee Gibson wrote of plans for Tulane University. Letters continued to suggest that women might suffer mental strain by attempting college work, but a woman wrote from the Cincinnati Morning Journal, ... such bosh works great injury among a sex already inclined to slight their intellectual faculties and cultivate their emotions. Martha Carey Thomas, '77, wrote on February 16 that she was the first woman to receive a Ph.D. from Zurich summa cum laude. The University was threatened by smallpox in January, and the whole college community was vaccinated. The origin of the serum used is detailed in correspondence. Hoping for a premium price, an agriculture graduate sent White a supply of premium butter, and there are several follow-up letters regarding its price and quality. Some other correspondents of interest are George W. Cullum, G. Stanley Hall, Robert Roberts Hitt, R. Heber Newton, George Mortimer Pullman, and Josiah Royce.