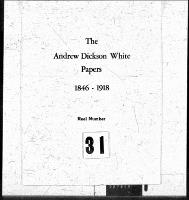 The correspondence during White's first year back at the university reveals his interest and participation in events beyond the administration of Cornell. His article on the spoils system in the February North American Review aroused much interest; he was elected to the vice-presidency of the State Prison Association; and a letter he addressed to the Ithaca Journal opposing a popular petition to set aside the court-martial of Sergeant Mason (a guard of assassin Charles Guiteau) was nationally reprinted. White's interest in his role of Fellow of the Metropolitan Museum of Art was expressed in a printed letter in support of Luigi Palma di Cesnola and his Cypriote collection. A letter from George W. Sillcox from Bremen warns of the possible influx of Russian Jews in the United States, and says they ... would be worse than the Chinese. The possibility of establishing a medical college in New York affiliated with Cornell is the subject of many letters in April from doctors John Roosa, Stephen Smith, and J. A. Wyeth. The New York alumni suggested the systematic placing of news favorable to Cornell in the newspapers, and George W. Jones proposed a program of paid advertising and the preparation of Cornell news at Ithaca by an expert, paid for his labor. James Edward Oliver sent White a proposal to grant university honors for exceptional and original scholarship.