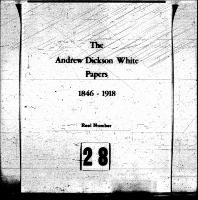 A reorganization of the university at the hands of the trustees was the topic of a large portion of the winter correspondence. Both professors and trustees laid the situation before White. In addition to asking Russel for his resignation from the vice-presidency and his history professorship at the end of the school year, the executive committee proposed on January 6 the elimination of four professors, Breneman, Jones, Oliver and Wing. Because of his intimate acquaintance with leading European scholars, White's advice was sought by many American college administrators hoping to strengthen their faculties. Small legation matters were reported from Berlin by White's assistant while he and his wife took a vacation trip to Paris, Nice, and the Riviera. There are some brief references to anti-Semitic incidents in Berlin. Letters from Fiske in Egypt report the gradual decline of his wife's health and also record the purchase of art objects and furnishings for their Ithaca mansion. Political correspondents comment on Garfield's first months in office and on his cabinet appointments. Friends on the faculty of the University of Michigan continue to report developments on that campus. Some correspondents of interest are Theodore Bacon, George C. Caldwell, John Fiske, and Eugene Schuyler.