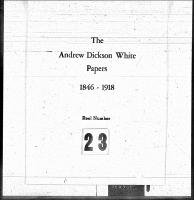 On April 19 White arrived in Paris for the opening of the International Exposition, which he served as a commissioner. The summer correspondence included, along with social and university matters, a number of letters concerning the awarding of prizes at the exposition. For his services he was made an officer in the French Legion of Honor on October 21. In April Russel's letters document a serious rift in the Mechanical Arts department. Fiske reported on May 8 a speech by Martin Brewer Anderson of Rochester favoring Greek letter societies. On May 17 White suggested to C. K. Adams the need for a department of History, Political & Social Science & General Jurisprudence, Sage reported Alexander Winchells removal from Vanderbilt University following his publication of a liberal paper, and on July 5 White wrote to Bishop Holland Nimmons McTyeire of Nashville in protest. White returned to Ithaca and his administrative duties in September. Among the letters received were one on November 20 from a man with college-age children who was deeply concerned by the practice of hazing at many colleges. John Wesley Hoyt, governor of Wyoming Territory, continued as a correspondent.