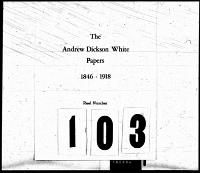 David Jayne Hill was appointed Ambassador to Germany, and there are a number of letters about the hostility manifested by some elements in the Berlin community. White wrote him a letter of advice on April 28th, and Hill answered in early May. There are letters on the reel from Persia, Czechoslovakia, England, and Russia. Professor Lutoslawski spent a few days visiting White in Ithaca, and resumed writing long letters to him. White made two trips to Europe during this period. In the spring he took his family to Italy for three months, and after returning to join in the 40th anniversary celebration at the Cornell commencement, he and T. F. Crane sailed for two months in northern Europe. In addition to many letters from former students and old friends, there are a number from the Meneely Company and a student chimesmaster about specifications for the overhauled chimes. Some other correspondents are Ezekiel, George Haven Putnam, William R. Thayer, and Horace White.